Matt is an extraordinary 22-year-old man. He went from starting offensive lineman on his college's football team to life-saving marrow donor.

And it all started as a request from Coach Joe. The coach asked his players to volunteer at a drive hosted by his football team and join the Be The Match Registry® to help save lives. Matt decided he could make the commitment and joined the registry in the spring of 2009, the end of his freshman year of college.

Ready to donate from the start

From the beginning, Matt was passionate about the cause. "Watching the videos about Be The Match really opened my eyes. After joining the registry, I began to give blood on a regular basis," said Matt.

Two years later, in the spring of 2011, Matt received the call he never thought would come. "I was told that I was a potential match along with three other people for someone in need of a transplant." Matt completed further testing to see if he was the best match for that patient. When Matt was told that he was the best match for a 42-year-old man with a form of lymphoma, he was excited to move forward with donation. "I said, 'Let's go,' but was told it would take some time," said Matt. 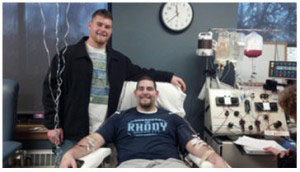 Matt (left) and his brother John (right) both donated marrow within two years of joining the registry. (Photo Credit: GoRhody)

Matt was informed that the donation method requested by the patient's doctor was a peripheral blood stem cell (PBSC) donation. He was prepared for the possible side effects, but did not experience any reactions until halfway through the third day. Even though Matt experienced "a massive headache and felt achy," he describes the days leading up to donation as "not too bad."

As for the actual donation, Matt took his competitive spirit with him for the collection. "Within four hours, the apheresis center had extracted enough for two donations because my count was so high," said Matt. "It was the highest count they had ever seen, until my brother."

Following in his brother's footsteps

That's right. This past fall, Matt's younger brother John donated PBSC to a patient in need. Nineteen-year-old John, who is also an offensive lineman on the University of Rhode Island football team, registered in the spring of 2012. "My parents thought John always wanted to follow in my footsteps," said Matt. "Now he really is!"

Matt and John both received an outpouring of support from their friends, family and teammates, especially from people touched by cancer. "They thanked me for what I did. It was a reaction I wasn't prepared for," said Matt. "They were all so proud, but to me it was a no-brainer."

A year after Matt donated PBSC, the Orlando Cancer Treatment Center flew him to Florida to meet Ken, his recipient. Ken, coincidentally a huge college football fan, is in full remission. After his college graduation this past December, Matt traveled to Florida a second time to attend a college bowl game with Ken.

Matt plans to continue his education with a master's degree in exercise science or strength and conditioning, while staying involved with Be The Match by hosting registration drives. In the past three years of the football team's annual drive program, the school has produced four donors: Matt, his brother John, his assistant coach and another college athlete.