Marrow donor Johnathan: "Be the change you want to see in the world"

Eight years ago as a student at the Texas School of Business, Johnathan joined the Be The Match Registry®. Four years after joining, he was called as a potential match for a woman with non-Hodgkin lymphoma. Further tests found that he was the best match.

Reaction of friends and family

When Johnathan first told his family and friends what he was about to do, they didn't really understand why he would do it. What was Johnathan's motivation? "My son Nicholas was born with cystic fibrosis. I would hope that if someone could help him, they would," said Johnathan. But with time and education about the donation process, his family and friends became very supportive and proud.

Two months after he got the call saying he was a potential match and the day after his birthday, Johnathan donated peripheral blood stem cells (PBSC) to help save a woman's life. 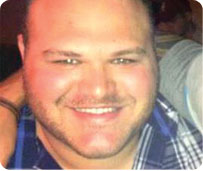 Johnathan, two-time PBSC donor, joined at a college recruitment drive at the Texas School of Business in 2005

Connecting with his recipient

A year after donation, Johnathan was able to connect with his recipient, Melissa1. Because the two lived in different parts of the country, (Johnathan in Texas; Melissa in New York) they stayed in touch via email and Facebook.

Melissa was in remission for three years before her cancer relapsed.  In May 2013, four years after his first donation and eight years after Johnathan joined the registry, he donated PBSC for the second time.

As part of PBSC donation, donors are given injections of a drug called filgrastim, intended to stimulate stem cells for the five days leading up to donation. The first time Johnathan donated PBSC, the side effects were "not too bad." Johnathan described feeling weak and not having as much energy as usual. The second time, however, he had more side effects from the filgrastim injections including bone pain and headaches. But Advil helped his pain subside in the days leading up to donation.

Approximately two days after Johnathan's second donation, his recipient Melissa sent him an email telling him that she received his cells. She spent a week in the hospital and was then sent home. Melissa told Johnathan that she is getting stronger every day.

"I don't think they realize how good of a thing they are doing just yet. Once you get the call and you get to donate, you are a hero to at least one person. It's the best feeling - you're a hero."