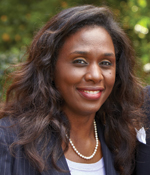 When Erma's husband Franco was told he needed a bone marrow transplant, he learned that he could have a hard time finding a donor match. That's because only 7% of Be The Match Registry® members are African Americans and patients tend to match those who share their ancestry.

Erma got involved right away, organizing to recruit members of her community to the Be The Match Registry. She never guessed that she would be called as a match for someone else before her husband received his transplant.

My husband Franco was an engineer - a fun guy and probably the calmest man I've ever met. When he was diagnosed with multiple myeloma, we were told that he would need a bone marrow transplant at some point. They also told us that for African Americans, finding a donor match could be a challenge.

We have five children. The youngest was two at the time. So I was determined to do whatever I could to make sure that when Franco needed a donor, one would be there for him. I called people to organize drives. I also called Rod, my contact at the local Be The Match recruitment center and would ask him, "How many people did you sign up today?"

I just wanted to make sure we signed up as many people as we could. It wasn't just for me. It was for my children. It was for my husband. If you were healthy, I wanted you on the registry.

When we began planning for my husband's transplant, we learned there were six possible matches for him. We waited anxiously while Be The Match contacted each donor, found out if they were available to donate and determined if they were a good match.

I also joined the registry even though I thought the chances of being called were low. But one day I got a phone call that I was the best match for a leukemia patient who desperately needed a transplant. I couldn't believe it.

The next day I got a second phone call. Franco had a match! When I heard they'd found a donor, I just screamed into the phone; I was so excited.

I was a little afraid to donate, but everything in me said it was the thing to do. My husband needed a donor and I had the opportunity to be a donor for someone else. It made me very happy to be able to give back.

After my donation, I did experience some stiffness later that night so I took the prescription pain medication. The stiffness lasted only a couple of days and then I was able to return to work. The little discomfort I went through was nothing compared to what it meant to me to be involved in saving another person's life.

The gift of time

Franco lived for five-and-a-half years after being diagnosed with cancer. Every moment meant a lot to us. His donor gave us a few more months with him, and we're so thankful to that donor for giving us more time together.

Still committed to Be The Match

My children have seen what a difference Be The Match made in our lives. In fact, when my oldest son turned 18, he signed up for the registry. He'll be there if they ever call him.

Ten years ago, I didn't know anything about marrow donation or Be The Match. Now I'm doing everything I can to spread the word. Everyone should get involved - from joining the registry and donating umbilical cord blood to raising awareness and informing people how they can help.