The boy behind the $1.064M matching gift 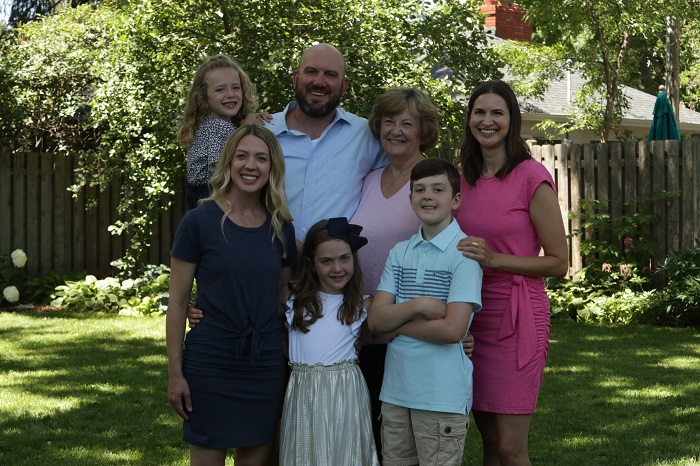 Alex’s story began with a few puzzling symptoms that weren’t cause for much alarm. “In the middle of winter, he was just unwell for a bit of time,” says his mom, Lindsey. Then things started to get more serious. “He had had a few bloody noses. But what brought us to the emergency room was a bloody nose that didn’t stop.”

Further testing led to Alex’s diagnosis of acute lymphoblastic leukemia (ALL). He was only two years old.

“To find out he had cancer was so scary,” Lindsey says. She and Jeff, Alex’s dad, had no idea the long road ahead. After enduring chemotherapy treatments for more than three years, Alex was healthy and strong again. Life was finally getting back to normal.

But just as Alex was finishing second grade, his parents noticed an enlarged lymph node on the side of his neck. Alex’s pediatrician diagnosed him with strep throat, and given Alex’s history with leukemia, ran his complete blood counts. The test results came back irregular, so the doctor recommended that Alex be re-tested.

A few weeks later, and the start of summer vacation, the follow-up blood test still showed irregularities, so Lindsey and Jeff made an appointment with Alex’s oncologist at Children’s Hospital Minnesota. Once there, more testing revealed irregular cell blasts in Alex’s blood that weren’t consistent with his original ALL, so Alex was referred for a bone marrow biopsy.

The biopsy results came back. And six years after his original ALL diagnosis, Alex was diagnosed with secondary acute myeloid leukemia.

“Hearing he had cancer for a second time was just completely devastating,” Lindsey shares. “We had gone down such a long road—it just shattered our vision of what life was going to be like.” Thinking back about how he felt about his second diagnosis, Alex says, “I was sad because I got lucky the first time.”

Although they were shocked and devastated their son would have to fight another tough battle, Jeff and Lindsey knew if anyone could do it, Alex could. They were so grateful for all of the love, prayers and support from their family, friends and community. Once again, Alex began treatment. This time, in addition to chemotherapy, his treatment would include a blood stem cell transplant.

Finally, there was light at the end of the tunnel. Alex found his donor match and received a cord blood transplant. And today, he’s enjoying as much “normal kid stuff” as a kid can enjoy during a global pandemic—playing football and hockey, tubing at the lake with his sisters and hanging out with his cousins. “I can play outside, I can be around more people—well, not necessarily now,” he says. “I can throw and catch the football without having to carry something around.”

Extremely grateful for the support they received throughout his journey, Alex’s family wanted to pay it forward and help other families get through the same challenges they went through.

Thanks to their generous gift through the Harper Family Foundation, every gift made to Be The Match® before September 30 will be matched* up to $1,064,000, the amount required to cover increased grant requests in the coming months due to the COVID-19 crisis.

According to Jeff, the intention of the $1,064,000 gift is to alleviate some of the hardship patients go through, so they can focus on their health and healing. Having gone through it with Alex, The Harper Family Foundation understands what an emotional time a transplant journey is and how the COVID-19 pandemic—when there’s a lot of insecurity and job loss—adds one more layer of difficulty.

“We know how hard it is for families to go through the transplant journey. Now with COVID-19, we can only imagine how hard it must be,” Jeff says. “Just to be able to provide some financial assistance to make it just a little bit easier some of these families going through these situations at this time, it was something that felt really good to do.”