Ryder’s Resilience: Facing the Search for a Matching Donor 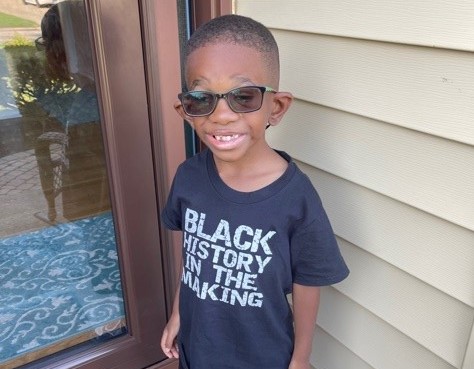 Five-year-old Ryder Washington loves to dance. He takes his parents’ phones to film TikTok dances with an energy that lights up any room. His fighting spirit also shines through in his yellow belt status in Taekwondo and his love of the WWE and University of Michigan football. Ryder is just like any other young boy, but he has dealt with health issues for most of his short life.

Ryder has always had an abnormal blood platelet count. When he was just 2 years old, a doctor referred his family to a hematologist to monitor his numbers more closely. At the beginning of 2021, Ryder woke up covered in blood. His parents, Terrence and Kimberli, knew something wasn’t right and rushed him to the hospital.

Doctors discovered his blood counts had changed. They diagnosed Ryder with  myelodysplastic syndrome (MDS)—a group of diseases that affect the blood-forming cells in the bone marrow. MDS is very rare in children this young. Ryder’s care team believes he will need a blood stem cell transplant—which uses blood stem cells from a donor—as part of his treatment. Currently, there are no donor matches for Ryder on the Be The Match Registry.

Dealing with the uncertainty around their son’s health has made an already difficult year even scarier. "As far as what the future holds, we never know," Ryder’s father, Terrence, told Fox 2 in Detroit.

Ryder’s community has come together to raise awareness about his need for a matching donor by hosting Be The Match® registration drives in his honor. Ryder loves seeing everyone come out to support him. “He thinks we are having these great parties for him. He’s like, 'What, another birthday?'" Ryder’s mother, Kimberli, told Fox 2.

It has meant the world to Ryder’s parents and their whole family to see people join the registry for Ryder. Terrence said, "It reinstated my faith in humanity,” and warmed his heart to see complete strangers come out and rally around his son.

You can help support Ryder and his family, too. Anyone ages 18-40 years old can sign up to join the registry. You could be a match for Ryder or another patient who needs a blood stem cell transplant. Text SaveRyder to 61474 or visit join.bethematch.org/saveryder to sign up.