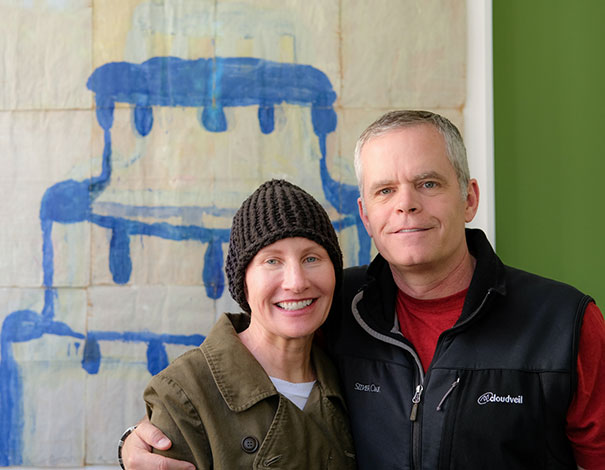 Kary and her husband David

A Notre Dame graduate (88’) along with her husband David (88’), practicing internist, dermatologist and mother of three, Dr. Kary Duncan is a beloved mainstay of the Napa Valley and Notre Dame communities. That’s why the news of her 2012 cancer diagnosis (myelodysplastic syndrome (MDS), a disorder caused by poorly formed blood cells, shocked those who knew her best.

In 2012, sensing something was amiss, Kary worked with an excellent team of physicians at University of California San Francisco (UCSF) to identify and diagnose her condition early. This lead to the first of two miraculous and life-saving bone marrow transplants, six years apart.

In seeking her first bone marrow donor, Kary’s team discovered a genetic mutation that increases predisposition to cancer. This ruled out her siblings as viable matches, as they might also have the same mutation. The search for an unrelated donor began through Be The Match® and was successful, resulting in her first transplant in June 2016. Ever determined and with a reinvigorated outlook, Kary made a full recovery and returned to her private practice only six months later.

Life began to feel normal. She was even pronounced “cured.” But when she began experiencing trouble breathing during a family vacation to Colorado in early 2021, Kary knew to listen to her body.

Not only had her MDS relapsed, it was close to transforming into acute leukemia. Her medical team sprang into action again and Kary had her second transplant in September of 2021. Two of her children, Maeve (23’) and Jack (25’), were attending Notre Dame. When their fellow peers learned of Kary’s story, they wanted to do something to show support.

Notre Dame’s Duncan Hall took the lead. Kyle Moon along with Rector Nhat Nguyen led a campus wide recruitment effort. The “Keep Calm and Kary On” campaign began with a swab drive to recruit more potential marrow donors but now has grown into so much more. The initial goal was to increase recruitment and educate students, their families and alumni about Be The Match. From their first campaign, 68 new potential donors joined the registry. Today, some have even been identified and contacted as potential donor matches.

Kyle shared that what he was most impressed by was how quickly the Notre Dame community joined this effort. “I knew there would be a great deal of support, but I was still impressed with how quickly students got involved,” Kyle shares.

Even though the “Keep Calm and Kary On” campaign wrapped up months ago, Kyle still sees students wearing the t-shirts and buttons from the campaign. “It’s so great to see these tangible signs of support even now.”

To Kary and her family, the campaign was a bright light in their transplant journey and a source of true joy to see young adults pour their hearts into helping others.

You can make a difference in the lives of people like Kary. Find out how you can support the cause at bethematch.org/support-the-cause.