Dorian’s cure starts with you 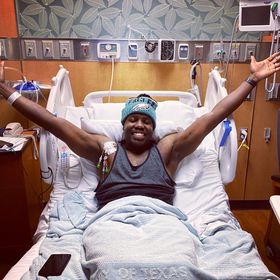 Dorian is the last person that you’d associate with the word “cancer.” A football player, an especially avid gym-goer, a bright, young engineer—the epitome of a healthy lifestyle and a healthy future. Yet suddenly, last year, Dorian found himself sitting in a hospital room as a doctor told him he has leukemia.

“As strange as it sounds, I’m still processing it. It’s over a year later and it doesn’t seem real, there’s still so much uncertainty with my situation.”

Like so many patients, Dorian is in dire need of a stem cell donor off the Be The Match Registry®. He’s counting on someone like to you to sign up and be his match.

Last summer began like any other; Dorian was working steadily and heading into the gym five to six days a week. Staying healthy and physically fit were top priorities. When a small tweak in his calf started to irritate him, Dorian initially wrote it off. Everyone pulls a muscle now and then, it’s no big deal. And so, he downed some Tylenol and continued pushing through his normal routine. But by the end of the week, the pain had intensified significantly—in just a few of days it had gone from a minor achy nuisance to the point where Dorian could no longer put pressure down on his leg. That Friday morning, he called in sick to work and rushed straight to urgent care.

Rather quickly, it was determined that Dorian’s discomfort was due to a blood clot. This explanation, however, only lead to more questions. When doctors began to conduct bloodwork, it become apparent that leukemia was likely the underlying cause.

“I was in disbelief… I thought it was just a muscle pain—I was expecting to just get some pain meds and a boot or something on my leg, but when I got diagnosed it was definitely shocking… it’s just out of this world.”

Dorian never returned home that day. Instead, he was transferred directly to the ICU and then the oncology ward, where treatment began shortly after. Without any immediate family nearby, he anxiously coordinated with his parents and sister over the phone, and they were able to come out and support him. The next few weeks trudged on with the same general pattern; the chemo would fight against Dorian’s leukemia cells, but it also led to additional maladies like fevers and gastrointestinal issues. It wasn’t until a month after his arrival at the hospital that Dorian was finally cleared to return home.

“After I got discharged for the very first time, I came home and went back into the hospital about two to three weeks later for an additional round of chemo. So between July and November, I literally spent a minimum of a week in the hospital each month. That was either dealing with chemo or a side effect of the chemo.”

While treatment was intended to curb the spread of Dorian’s leukemia, it would not altogether eradicate it. A cure would instead need to come from a stem cell transplant, donated by another individual. But without a fully matched donor available on the Be The Match Registry® by December of 2019, Dorian decided to move forward with a haploidentical (or half-match) transplant with his sister.

The first few months post-transplant looked fairly promising. The donated cells seemed to be grafting and medications were helping to build back up Dorian’s immune system. But when he went in for a bone marrow biopsy in the spring, to check in on his progress, the results were concerning. Dorian’s leukemia cells were starting to return – meaning that his transplant had sadly been unsuccessful. Back to square one…

For the past six months, Dorian has returned to the grind of chemo, heading into the hospital about once a month. Unfortunately, he’s running out of time. More than ever, Dorian needs an unrelated donor to help save his life. Usually, matches are far more likely to occur if the donor and recipient share the same ethnicity. However, African American patients like Dorian significantly lack representation on the donor registry, and as a result, they only have about a 23% chance of finding their donor. YOU can help to change that, though. By signing up to join the registry, you can increase the odds and give hope to thousands of searching patients.

Learn how you could be someone’s match by joining today.