A second chance at life during a global pandemic 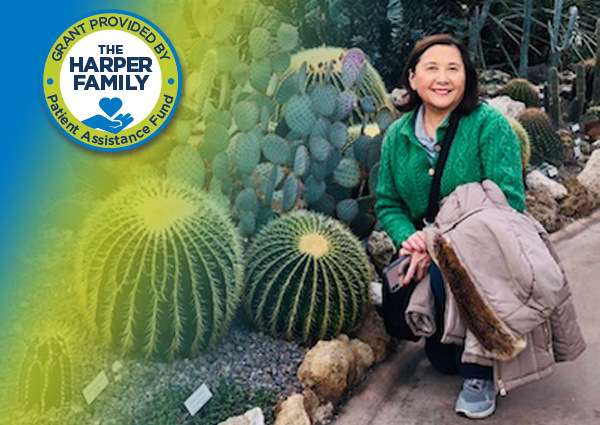 Since the severity of MDS varies from person to person, and she wasn’t experiencing any symptoms, Barbara was able to manage the disorder while her blood counts continued to be monitored.

But eventually, she started feeling very tired and having trouble breathing and walking. So, doctors performed a bone marrow biopsy to help determine the specific type of MDS Barbara had. This was March 6—just five days before WHO declared COVID-19 a pandemic. One week later, Barbara was diagnosed with high-risk MDS. “I was disheartened, not discouraged.  I still held out hope,” she says.

She immediately started chemotherapy treatment. And soon after, states began issuing stay-at-home orders and only patients in need of life-saving treatment were allowed in health facilities. For five days, Barbara would go directly to her treatment, then she’d be off for three weeks, repeating this from March to June.

As a transplant doctor in cardiology, and knowing that a bone marrow transplant was the only proven cure for Barbara’s MDS, Barbara’s son-in-law, Stephen Pan, began researching where she could receive one with an ongoing pandemic.  There was also the issue of age caps on the procedure.  Barbara was over 70.   He learned that Memorial Sloan Kettering Cancer Center (MSK) would be able to do the transplant—but not until it was safe enough to re-open.

Finally, in June Barbara was able to meet her MSK care team in person and begin preparation for transplant—including the required HLA typing to find a donor match. Her three brothers were tested and remarkably, one of them was a perfect match on 10 markers.  “I’m incredibly grateful that my brother was a match,” Barbara says. “I didn’t have a perfect match on the registry, which is what I feared. Being Asian, I know it’s less likely that I would find a match.”

Barbara received her transplant in October and stayed in the hospital for four weeks to recover and regain her strength, then another month in temporary housing near the transplant center where she required 24-hour care. Thanks to the Harper Family Foundation, she was able to receive a grant from Be The Match® to help cover some of the uninsured costs related to transplant. “This was a wonderful gift,” Barbara shares. “Going through an illness and a transplant doesn’t just take a toll on you physically, it affects every aspect of your life—including your finances. The gift I received acknowledged this.”

Back to being Barbara

Now well past the critical 100-day-post-transplant milestone, Barbara says she’s starting to feel more like herself. Her energy is slowly returning, she’s enjoying time with her grandson and is excited to get back into the painting she enjoyed before she got sick.

“It’s so important to listen to your intuition and advocate for the care you need and deserve,” Barbara says. “With the past 10 years of advancements, people my age are still able to have a life-changing transplant. It’s been an amazing journey.”

If you’d like to help make sure more patients like Barbara can receive financial assistance to overcome barriers to life-saving transplant, please make a gift today.

Related Posts
Watch Robin Roberts on Jeopardy and make her impact for Be The Match into a true Daily Double
Lawrence E. Estaville, Jr., PhD leaves a legacy with Be The Match (R)
Be The Match employee takes supporting the mission to a new level
Play for cures: Raise money - and hope - for patients with blood cancer