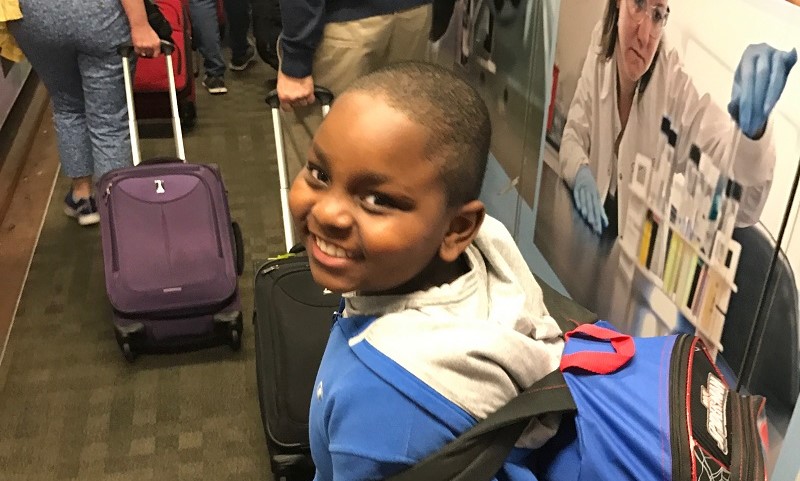 Brian is a straight-up goofball. A daredevil. A spontaneous, fun-loving kid of 10 years-old, who loves playing videogames and throwing a football with his friends in the park. Like most children his age, Brian has spent the past few, COVID-bound weeks behind a computer screen, attending school via video chat. Unlike his classmates though, Brian participates from the hospital bed, where he’s been receiving chemotherapy and undergoing bone marrow biopsies and other tests to help treat his leukemia.

This past year has been enormously challenging for Brian and his family, but they remain hopeful that he’ll be able to find a matching donor off the Be The Match Registry®.

Last November, just a couple weeks before his birthday, Brian began to develop severe nosebleeds that just didn’t want to disappear. Naturally concerned, his mom, Nita, suspected that the dry winter air might be the cause—so she went out and purchased a humidifier. No luck. In fact, over the next day the bleeding only seemed to worsen, to the extent that Nita began having trouble stopping the flow through pressure. Normally brimming with energy, Brian was also beginning to feel particularly fatigued. When things still hadn’t improved the following morning, Nita rushed Brian over to urgent care.

From there they were rerouted to a nearby hospital, where doctors questioned and examined Brian for hours, trying to determine what might be going on. At one point, they were nearly ready to send him back home, but Nita insisted that something was very wrong. So, the doctors ordered a set of blood tests. When they returned a little later, Nita was told that Brian’s nosebleeds might be related to some sort of virus or possibly a form of blood cancer. When she heard this, Nita remembers thinking that it had to be the virus; the idea of cancer just completely evaporated from her thought process.

As the day progressed, Brian was again transferred, this time to a more specialized pediatric hospital. Doctors there reviewed the earlier test results and, within a couple hours, Brian was officially diagnosed with acute lymphoblastic leukemia (ALL).

Treatment began almost immediately. A port was installed in Brian’s chest and he started an aggressive, 10-day chemo regimen. On the last day, the green light was given for him to return home—and within just a couple days there, Brian went into full remission. What did this mean? Leukemia cells were no longer evident in his bloodwork, though he was still required to take a daily bevy of medications and go in for semi-frequent check-ups at the hospital. But for the most part, life returned to normal over the next eight or so months and Brian was again his customarily rambunctious, cheery self. As the seasons warmed, he decided to teach himself to swim and began spending time at the local pool. He convinced his mom to take him camping for the first time, over a long weekend. And from there, he accumulated yet another hobby in fishing. Things were good. It was fun being a 10-year-old again.

But then, in June, it all suddenly went downhill. During a routine lumbar puncture, it was discovered that Brian had relapsed. “It was like reliving the first time over again, but even worse,” confesses Nita.

Since then, Brian has spent much of the past few months in and out of the hospital, undergoing additional rounds of chemotherapy, with weekly lumbar punctures and monthly bone marrow biopsies (in which a bone marrow sample is collected and tested). By now, he’s fairly used to it all, but that doesn’t stop the treatment from being scary. When it comes time for his procedures, Brian usually gets pretty quiet. He knows what’s going to happen.

At this point, Brian’s best shot at eradicating his leukemia comes in the form of a bone marrow transplant. He’s relying on the kindness of a donor—a complete stranger—who fully matches his HLA type (a sort of incredibly precise genetic coding, with shared individuals like needles scattered in population haystack). Usually, this is far more likely between people of the same ethnicity. However, African American patients like Brian are severely underrepresented on donor registry. In fact, they currently only have a 23% of finding their donor. But the good news is that that you can help increase that number. Learn how you could be someone’s match by joining today.