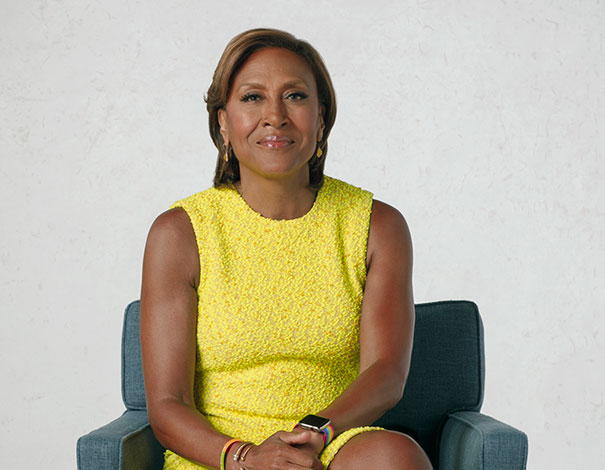 As we celebrate Robin Robert’s 10th re-birthday, marking a decade since she received a life-saving blood stem cell transplant from her sister Sally-Ann, we wanted to share some of our favorite memories of working with Robin. The Good Morning America (GMA) anchor has been a tireless advocate for Be The Match® and patients searching for a matching donor.

One of our favorite phrases Robin continues to share is to take your mess and make it part of your message. When she first realized she would need a blood stem cell transplant, she was thrilled to learn her sister Sally-Ann was a match. However, her thoughts quickly turned to the thousands of patients who do not have a match.

She took a devastating diagnosis and used her experience with transplant to advocate for the Be The Match Registry®, selecting Be The Match as a charitable partner on several occasions and helping to raise awareness that has led tens of thousands of people to join the registry and at least 140 of those people have gone on to donate blood stem cells and give patients a second chance at life.

Here’s some of our favorite memories from our journey with Robin:

In 2012 as she prepared to receive her transplant to help her beat (myelodysplastic syndrome MDS) she started to fundraise for Be The Match, working with our foundation to create a “Robin Roberts Prayer of Protection Wristband.” The bracelets said “Light, Love, Power, Presence.” on them, a reminder of a prayer Robin had learned from her mother growing up.

Hundreds of thousands of wristbands were sold and contributions were donated to Be The Match. What a gift to help more patients receive financial assistance grants and help the organization continue to grow the registry!

When Erika Turner, a busy working mom of two teens, began feeling tired and noticed a bit of bruising on her body, she wasn’t immediately suspicious. But a resident at the hospital where she worked pointed out it looked like her platelets were low, and encouraged Erika to have it checked out.  Erika was diagnosed with a rare form of leukemia in Sept. 2010 and doctors said Erika would need a bone marrow transplant to survive.

Fortunately, Erika’s doctors identified a matching Be The Match donor and she received her transplant in December 2010. Erika’s donor, Christopher Magoon, was attending Yale University when he joined the Be The Match Registry at a donor registry drive on behalf of Mandi Schwartz, a fellow Yale student. While Christopher was not a match for Mandi, he was able to make a life-saving donation to Erika in his senior year.

When Robin brought Erika and Christopher together in-person their story led more than 3,000 people joining the Be The Match Registry making it one of the top 3 most successful registry-driving news stories!

When Chris Betancourt was just 20 years old, he was facing a challenge that required he fight for his life with leukemia. While his future remained uncertain and he awaited a donor to receive a blood stem cell transplant, Chris pursued a bucket list goal to break the world record for the most Be The Match Registry sign ups in a single day.

Chris and his best friend Dillon Hill were helped in this achievement by Robin and the team at GMA who helped spread the world about #LemonsforLeukemia which became a viral sensation with the likes of celebrities such as Danny DeVito and Dwayne “The Rock” Johnson.  Chris had his transplant shortly thereafter and will be featured on GMA in September 2022.

There were a lot of dark moments Robin had to face as she endured her transplant. She remembers a nurse speaking to her throughout one night when she felt she was slipping away. She was also grateful for her transplant doctor, Sergio Giralt at Memorial Sloan Kettering. Robin joined the Be The Match team at its NY Soiree in June 2018 to honor Dr. Giralt with an award and thank him for his leadership in improving access to transplant and improving overall patient outcomes.

Nothing moves us more than seeing heroic donors meeting for the first time the young patients whose lives they’ve helped saved. Robin and the GMA team brought 8-year-old AJ together with his donor Alex live on stage in 2017. There wasn’t a dry eye in the studios that day.

“Alex is already a part of our family and I really look forward to just sharing life with her,” AJ’s mom said. “I’ve been doing that so far – sending her messages and pictures of AJ and every time he meets a milestone I’m just excited to share with her.” Why did Alex, only 22 at the time of donation, decide to help a complete stranger? “Because it’s the right thing to do,” she said.

Swabbin’ for Robin:  A plea for Juwan

When 17-year-old Juwan Adams searched the Be The Match Registry for a donor to help him beat lymphoma, he did not have any suitable matches. He set a personal goal of adding more than 1,000 ethnically diverse donors to the registry. He turned to Robin in early 2020 for help and she helped him exceed his goal.

After Juwan filmed a live segment on GMA, Robin took time to film a personal appeal on behalf of Juwan – an appeal that would lead to the most Black or African Americans to register ever in a single year.

Nobody would argue that Robin is a woman of many talents – but bowling? Who knew? She was the state bowling champion in Mississippi when she was just 12 years old! Robin selected Be The Match as her charity of choice on a fun Holey Roller segment on The Ellen Show.

So often we won’t even know when Robin is planning a surprise for our team – and that’s what happened when one day Robin appeared on the Ellen Show and decided she would bowl to raise money for Be The Match. Although our mission is serious, we know that laughter can sometimes be the best medicine, which is why this segment tickled our funny bones. Check it out for yourself!

In 2021 Robin had a chance to be a guest host on Jeopardy! and pay tribute to Alex Trebek. This was an experience she said took her out of her comfort zone – and that’s something we love about Robin, being willing to do hard things and teaching us to do the same by sharing how she makes it through.

Jeopardy! matched the participant totals for the week with a $164,410 gift to Be The Match, which Robin selected as her charity of choice. We hosted our own “Daily Double” challenge with our supporters to double Robin’s impact and raised in total $376,957 – enough to provide 184 patients with financial assistance.

A surprise for Joshua

As a toddler, Joshua Biyoyouwei, a sickle cell warrior, suffered a silent stroke leading to partial paralysis and him relying on a wheelchair. The only cure for sickle cell disease is a bone marrow transplant. But without any matches on the registry, Joshua’s mom Vera reached out to Robin Roberts asking her to help advocate for her son.

The family was thrilled when Robin visited the family when Joshua was 6-years-old. Fast forward to 2021, and Robin still remembered Joshua and their sweet time together. She wished him a happy 14th birthday and invited the family months later to be a guest on GMA. The family was shocked and moved to tears when Robin and the GMA team presented Joshua with a handicapped accessible vehicle from Rollx Vans so that Joshua could enjoy greater independence.