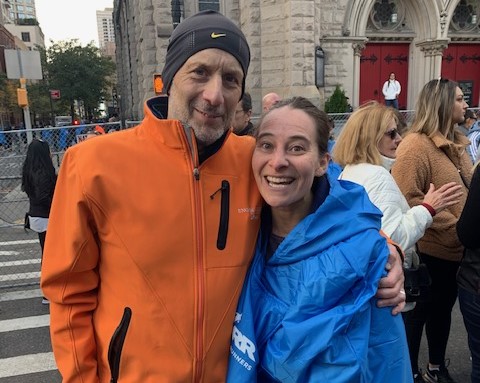 In 2009, Andrew went to his doctor for a regular check-up. As a marathon runner and active father, husband and lawyer, he felt and appeared to be perfectly healthy. But a blood test revealed abnormalities that led to a diagnosis of chronic lymphocytic leukemia (CLL). Suddenly, Andrew was battling cancer.

Although doctors knew the only cure for Andrew would be an eventual marrow transplant, they maintained his health through other therapies for as long as possible. This allowed Andrew to gain strength and prepare to receive his transplant. Five years after initially being diagnosed with CLL, the cancer Andrew was battling transformed into Hodgkin’s lymphoma. The time he and his doctors had been preparing for had come—Andrew couldn’t wait any longer for a marrow transplant.

His brother and sister were tested first, but neither of them were a suitable match, which is the case for more than 70% of patients. This meant Andrew would need to receive healthy blood stem cells from an unrelated donor. Andrew’s team of doctors turned to the Be The Match Registry® and found someone who matched his DNA. Her name was Erica. At the time, all Andrew knew about his donor was that she was a young woman and she was willing to donate her marrow to a complete stranger.

Making the most of a second chance

Andrew received his new, healthy marrow from Erica in March of 2016. Although things went well and he avoided many of the possible complications associated with transplant, he did face his fair share of setbacks. Between contracting a respiratory virus before his transplant and battling pneumonia afterward, Andrew finally went home two months after receiving his cure and began his journey back to a new, “normal” life.

Today, when Andrew reflects on the years he spent fighting for his life, he feels grateful for his circumstances. He found his perfect match in Erica, and the two remain close to this day—he got to cheer her on in this year’s New York City Marathon. He had the emotional support of his family and friends throughout his experience. And he had access to expert physicians and the financial resources to support his care.

Andrew recognizes not every patient is this fortunate, which is why he is committed to supporting Be The Match®. He volunteers for the Be The Match legislative advocacy group, working to improve access to transplant for Medicare patients. He is also involved in the Be The Match peer connect program, offering comfort to patients navigating their own transplant journey. And, in addition to his volunteer efforts, Andrew has contributed financially—he’s been a monthly sustainer for nearly two years—further supporting patients and their families.

Connecting patients with their donors, like Andrew and Erica, is made possible by the vast Be The Match community. Each and every person that supports the mission, in big or small ways, makes it possible to save lives. Learn more about what you can do.