When strangers become bonded for life 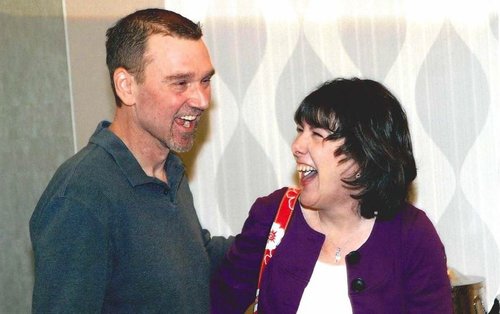 Carol remembers the day when she first learned about the Be The Match Registry®. It was a typical Sunday at church when a fellow parishioner shared about donating blood stem cells to save a young child—and that child was now a young adult. Carol was moved by the story and swabbed her cheek that day, November 11, 2007, to join the registry.

Four and a half years later, she was told that she was a potential match for a patient in need. She remembers feeling nervous, scared and worried about how she would manage the time commitment to donate since she was self-employed. But, her motivation to save a life outweighed any of the hesitation she felt. On July 27, 2012, Carol had her cells collected. She was thinking about her recipient the whole time. Carol understood that when her part was over, the hard work of healing for the recipient of her cells would really begin.

In 2008, Doug, a father of two, began feeling increasingly tired and worn down. When he was at a volleyball game and couldn’t sit comfortably, he knew something was wrong. He was diagnosed with myelofibrosis and doctors determined right away a marrow transplant would be the only option for a cure. To buy time and get stronger, Doug managed his cancer through other therapies. But four years after his diagnosis, time was up, and Doug couldn’t wait any longer for a blood stem cell transplant. Little did Doug know, a stranger named Carol had joined the registry—and she was a perfect, 10/10 match.

One year after his successful blood stem cell transplant, Doug and Carol exchanged information and began communicating by phone. For Doug’s 50th birthday, his family secretly arranged for Carol to visit and give Doug the surprise of his life—a chance to meet the woman who had given him a second chance. A chance to see his kids grow up, attend college and so much more.

Although they began as strangers, Doug and Carol are now forever bonded. They share the same DNA, they were born six months apart to the day and they have family names in common.

Carol and Doug are both grateful for Be The Match® bringing them together. They continue to support Be The Match by sharing their story and Carol has even been a monthly sustainer for the past four years.