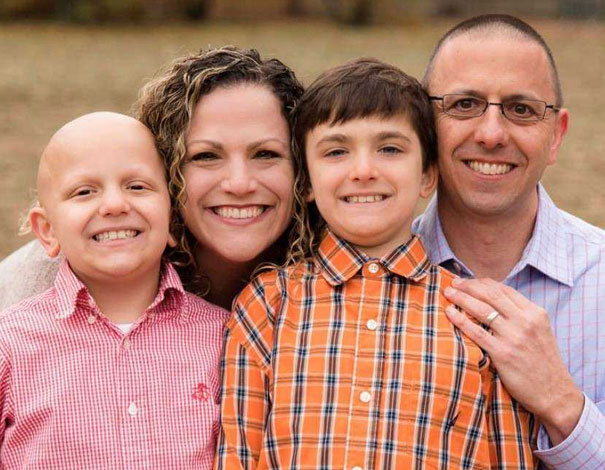 When you see Eli and Jacob Kulman together, it’s clear how much the brothers adore each other. They’re silly, fun and full of energy—playing and wrestling, hanging out with friends, and yes, enjoying a little screen time.

But their lives as babies weren’t as carefree and happy as they are today—both boys were often sick. Eli, the oldest, underwent multiple health scares with surgeries for ear tubes, tonsils and adenoids. He was diagnosed with food allergies and made several trips to the emergency room.

Jacob, born two years later, also battled various illnesses and severe food allergies. When he could no longer eat foods, his parents, Ali and David Kulman, had to feed him formula, carefully introducing foods one at a time.

“Every child gets sick,” David told Good Morning America. “The difference that we started to see, and not understand, was how come ours didn’t get better? And nobody could tell us.”

Life for the family was filled with doctor appointments and trips to the hospital for tests, treatments and surgeries. Until finally, in 2018, genetic testing gave them their answer: immunodysregulation polyendocrinopathy enteropathy X-linked (IPEX) syndrome.

IPEX syndrome is an extremely rare inherited immune disorder that causes the immune cells to attack the body’s healthy tissues. It can lead to serious complications and life-threatening infections. A blood stem cell transplant is currently the only treatment; without one, the boys’ parents were told, Eli and Jacob wouldn’t live past the age of 30.

“I fully intend to have my children outlive me,” Ali said. “That is my life’s mission for them to have a long, happy, healthy life.”

The Kulman brothers are Ashkenazi Jews, one of two major groups of Jewish people with ancestors who lived in Central and Eastern Europe. And like all stem cell transplant patients, they required a genetically similar donor match. Incredibly, one person on the Be The Match Registry® was a suitable match for both boys.

In October 2019, the family moved away from friends and loved ones to be near the Children’s Hospital of Philadelphia where the boys started pre-transplant treatments. And after a series of setbacks and the onset of the COVID-19 pandemic, the brothers received their second chance at life thanks to one incredibly selfless man—Avi Kaplan.

Avi joined the Be The Match Registry when he was a senior in college. He swabbed his cheek and didn’t think much about the likelihood that he would be a match. Like the Kulmans, he is also Ashkenazi Jewish.

“I didn’t hear from Be The Match for another 15 years. Periodically they would follow up with me to update my contact information—maybe four months into COVID, I heard that I was a match,” Avi shared with Fox 5 News in Washington, DC. The father of two children who are close in age to the Kulman brothers, Avi said the procedure of donating blood stem cells was very simple.

“I don’t think he has any idea or any frame of reference to know what he’s given us—what he’s given our kids,” David shared on Good Morning America. “To a donor, it’s a fairly easy process—not a huge deal. For us, you know, it saved our family.”

The stem cell transplant was a success and today, after many months living away from home, Eli (10) and Jacob (8) are back at home and thriving. They even got to thank the donor who saved their life when they met Avi for the first time this past October.

Recently, the boys celebrated their second “re-birthday” and now refer to themselves as twins because they received their transplant on the same day.

You could save a life—maybe even two—like Avi. Join the Be The Match Registry today.